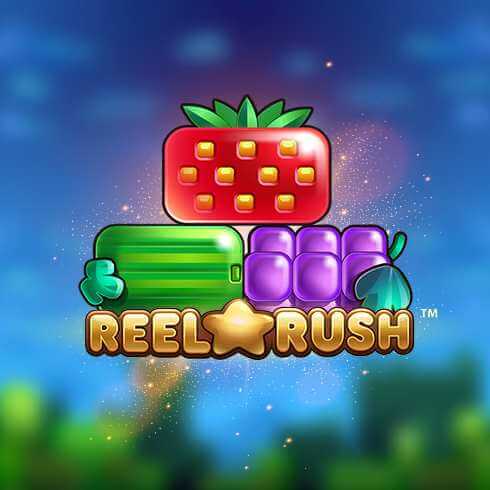 Reel Rush is an extremely popular slot game on NetBet Casino. From providers Net Entertainment, this colourful, vibrant and dynamic slot contains no fewer than 3,125 ways to win and some big-winning and unique bonus features making it a perfect game for all slot players (beginners included).

Reel Rush harks back to the popular video games of the 1990s with its bold graphics, fun gameplay and classic fruit and sweet slot symbols. Many have compared this slot to the famous Super Mario Nintendo game (also a 90s classic), mainly because of its quirky soundtrack, which has a particularly unique feature - the sound speeds up as players make their way through the game’s “levels” and gain more winning combinations! Reel symbols are classic and include juicy fruits like grapes and lemons, as well as some succulent sweets. The higher value symbols are represented by bigger symbols coloured purple, red, orange, yellow and green, while all the lower paying symbols are the same as the higher ones, only smaller in size.

Reel Rush is an easy game to navigate. Players must first place their chosen bet (easily adjustable on screen), before they begin spinning the reels. To set the bet level, simply use the “Level” icon on screen below the reels. The levels range from 1 to 10. As players alter the bet level, the value of the bet will change. Coin values can also be changed before commencing gameplay. Players can also simply leave the bet level and coin value as they are by clicking on the “Max Bet” button. This will allow players to start gameplay at the highest bet level possible with the current coin value. Now, all that remains is for players to press the “Spin” button, which is located at the bottom of the reels, and hopefully land as many winning combinations as possible. Like most slot games, Reel Rush features an “Autoplay” button on screen that enables players to spin the reels for a pre-determined period of time (this feature is more advisable for experienced slot players, as the reels will spin extremely quickly in this auto mode).

There is only one Wild symbol in Reel Rush - this is the bold bar symbol, displaying “Wild”. The Wild bar symbol will appear in the game on reels 2, 3, 4 and 5 only and will substitute for all other reel symbols.

Reel Rush is big on bonuses. And the game’s most impressive feature is the reel transformations. When the game begins, there are a total of 13 reel symbols present, and the rest of the symbols are marked with an “R” symbol. When a winning reel combination is landed, the “R” reel symbols will disappear. This will happen each time a winning combination appears on screen, until there have been 6 wins in a row. Once players have reached this target, the reels will take up the entire interface and eight Free Spins will be awarded.