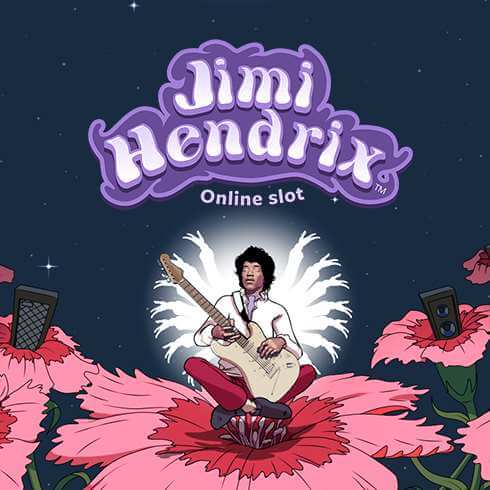 He may have died in 1970, but rock god Jimi Hendrix’s name has been immortalised in a fantastic - and psychedelic - video slot game on NetBet Casino. From providers NetEnt, Jimi Hendrix is a fast-paced and hugely entertaining slot game that slot lovers and newbies alike will enjoy immensely.

Jimi Hendrix’s memory lives on in his music (most notably with songs like “Purple Haze” and “Foxy Lady”), but you can now enjoy the rock god’s legacy on online casino thanks to this superb slot. The 5-reel 3-row game’s layout and functions may be basic, but the psychedelic feel that runs throughout the slot, from the reel symbols to the setting to the soundtrack) is most certainly not. It’s all about flower power on this slot - the backdrop is a fantasy desert and reel symbols include the rock legend himself, a white guitar, a heart, a vinyl disc, a flower, an eye and a peace logo. These icons are the higher paying symbols - the lower value symbols are 10, J, Q, K and A.

Before pressing the “Spin” button, players must first set their reel bets. The minimum bet per spin on Jimi Hendrix is 0.02 and the maximum is a huge 200. Players will find the interface easy to navigate - to the right hand side of the “Coin Value” selector is the “Coins” icon which displays the number of coins available to wager. Players can also simply choose the “Max Bet” option, which will enable them to play with the fixed maximum bet lines and the current coin value. Now, all that remains is to spin the reels and land on some winning combinations (triggered by a number of icon combinations, special symbols and big-winning bonus features).

There are a number of Wilds and Scatter symbols in Jimi Hendrix which will trigger some huge payouts. The Wild symbol will substitute for all other icons except the Scatters. The Scatter symbols are, amongst others - Purple Haze, the red guitar and the Jimi/white guitar symbols.

This feature is the game’s most attractive one, and players can win any one of four prizes. The feature will be triggered by landing 3 of the Jimi Hendrix Angel symbols, then by clicking on a loudspeaker to reveal one of the four prizes below:

When players land a Purple Haze symbol on reel 1, the icon will turn wild along with 10, J, Q, K and A - this will the determine the payout.

Landing at least 4 of Jimi’s red guitar symbols will trigger the repins feature. During every respin, the feature will reactivate itself and keep on going until no new guitar symbols land on any reel. This feature will award some significant payouts.