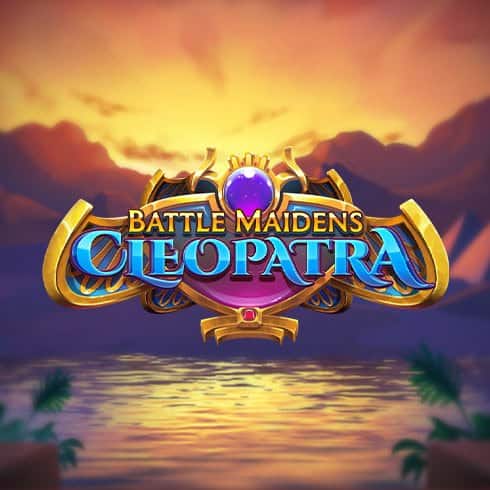 Join a fight against Anubis, God of the Dead, in Battle Maiden's Cleopatra slot. Powered by 1x2 Gaming, the game features the mighty Cleopatra and is packed with innovative bonus features. Expect to see Wilds, Scatters and a lucrative Free Spins round which offers up various modifiers, including extra Free Spins, Sticky Wilds, 2x multipliers and expanding symbols. Want to know more about this 1x2 Gaming title and its features? You're in the right place! Below, we explore Battle Maiden's Cleopatra slot in more detail.

If you're familiar with 1x2 Gaming games, you'll have no problems getting to grips with Battle Maiden's Cleopatra slot. The setup is fairly standard, with five reels, four rows and 1,024 ways to win. You'll need to land three or more matching symbols on a payline to form a winning combo, from left to right starting from reel 1. Before hitting spin, you'll need to set your bet via the coin tab in the bottom left-hand corner of the screen.

Volatility wise, the slot is fairly standard for games of this type. This provides a nice balance between low risk, low reward and high risk, high reward, making the game suitable for players of all background. The RTP is set at an average 96.4% and the maximum win stands at an impressive 10,000x your total stake.

There's plenty of excitement in the features department of this game. First up, let's explore the Transforming Wilds feature. Whenever the Eye of Horus symbol lands on the grid, it transforms into a Wild and can substitute for any of the standard symbols to help form a winning combo.

You can enjoy 2x multipliers, Sticky Wilds, extra Free Spins, expanding multipliers and expanding symbols, so get ready for your bankroll to be seriously boosted! During the base game, the Maidens are restricted to a single reel, but they can land anywhere during the Free Spins feature. This means that it's possible to land multiple modifiers on the same Free Spin. Whenever the Eye of Horus symbol lands during the Free Spins round, you'll be awarded one extra Free Spin and the win multiplier will increase by one.

Design-wise, Battle Maiden's Cleopatra slot is impressive. Set in the heart of ancient Egypt, you'll see palm trees swaying behind the reels and hear a haunting soundtrack play out in the background. The reels are set inside a gold frame and have a statue of Anubis, God of the Dead, on either side.

As you'd expect, the reels are filled with various theme-fitting symbols, including A to J royals as the low payers. The high payers are represented by 6 hieroglyph symbols. The most lucrative symbol is the Sphinx, which pays 50 coins for a five-of-a-kind combo. In terms of bonus symbols, you'll see five Battle Maiden Scatters, which activate the Free Spins round, Anubis as the Wild symbol and also the Eye of Horus.

This will allow you to get to know the slot and its features before putting your hard-earned cash on the line. It's worth remembering that you won't win any real money in demo mode. To be in with a chance of winning big, you'll need to play Battle Maiden's Cleopatra slot for real money.

Looking for an action-packed slot with decent winning potential? Battle Maiden's Cleopatra slot is the one for you. To start playing today, sign up at NetBet using your mobile, desktop or tablet device. If you're a fan of Egyptian-themed titles, check out other NetBet top games such as Legacy of Dead, John Hunter and the Book of Tut, Mega Pyramid and many more!